The climate is mild during the whole year. A rich gastronomic heritage and folklore, combined with the friendly hospitality of its residents, make the province one of the most popular destinations in Tuscany.
Livorno is the first port of Tuscany. Its actual population is the result of a mixture of ethnic groups and religions, thanks to the so-called "" Livornine laws "" that facilitated the immigration of people from near and far: Holland, Germany, France, Portugal, Armenia, Greece, which has left indelible signs in churches and cemeteries built by them.

The city was built by the Medici family, in 1577, then rebuilt after the bombings of World War II. These, however, did not affect the city's historical centre. A series of waterways framed by elegant seventeenth-century buildings around the Old Fort, the ancient Castle of Livorno, give to the district the charming name of ""New Venice"".

The Central Market is the best place to feel the atmosphere of the real Livorno, the smell of the salty sea air and fresh fish which are used in the ""Caciucco"" soup a tasty dish as genuine as the people who live there.
The Tower of Meloria, which was rebuilt in the 1700 on the foundations of a twelfth century Pisan tower is well worth sailing to. It can be found on a stretch of sea, directly in front of the harbour of Livorno, only seven kilometres away.
The “Terrazza Mascagni” is both romantic and evocative it opens out over the coastline. This walkway is dedicated to the composer Mascagni, who spent the first 21 years of his life In the midst of these colours and romantic. evocative, atmosphere.

Collesalvetti is a municipality situated in the most northern part of the province. Rosignano Marittimo, a hamlet of Vada, is a famous site for tourists, thanks to its ""Spiagge Bianche"", white and pearly beaches that extend for miles. Rosignano is a pretty town of medieval origins situated on top of a lush green hill of olive tree groves and precious, quality vineyards. A little further south is the town of Cecina, also famous for its medieval winemaking traditions.

The municipality of San Vincenzo on the south coast, is one of the best equipped tourist centres in the area, with 12 km of fine white beaches.
A few kilometres away is Campiglia Marittima, one of the most charming old towns of the Etruscan Coast. The town of Suvereto is a characteristic village between the sea and the hills, covered by cork trees, olive trees and vineyards.

Set on a hill amongst the chestnuts trees, is the town of Sassetta, overlooking the sea of the Etruscan Coast.
Castagneto Carducci is located in the heart of the Etruscan Coast, also situated on a hill overlooking the sea. Its origins date from around the 11th century with the Gherardesca Castle and the Church of San Lorenzo, and since ancient times this municipality boasts a fine wine tradition.
Piombino is located on the Etruscan coast in the far south of the Province of Livorno. It is a medieval town, with narrow alleys and cobbled streets. In the centre, stands the Torrione monument, Il Rivellino and ancient churches. Piombino was the centre of the Etruscan civilization. It is well represented in the open-air museum of the Archaeological Park Baratti Populonia: 80 hectares of walks through cemeteries, limestone quarries and industrial districts of the ancient city.

Between the Liguria and the Tyrrhenian Sea, emerges the most coveted oasis of the Tuscan Archipelago, the Isle of Elba. Its numerous sandy beaches and its cliffs overlook the sea. It has eight municipalities : Portoferraio, Campo nell’Elba, Portoferraio, Marciana, Marciana Marina, Porto Azzurro and Rio Marina and Rio nell'Elba. In the past many people wanted to conquer the island not only because of its strategic position but also for the wealth of minerals found in its subsoil, as can be seen in the excellent agricultural products from Rio Marina and Rio Elba. The product that stands out however is its wine. The vineyards can be found all over the island often in picturesque settings, like the ones clinging to the hillside which run from Rio Marina toward Portoferraio passing through Porto Azzurro and Capoliveri.

The Island of Capraia, pearl of the Tuscan Archipelago National Park is without beaches but it is known instead for its rocky, sharp coast.
The town is surrounded by jagged cliffs overlooking the sea, where elegant, arrogant seagulls circle in ancestral ritual above the rocks and sea. 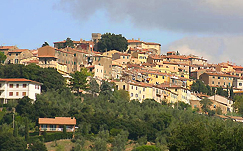 There is currently no content classified with this term.